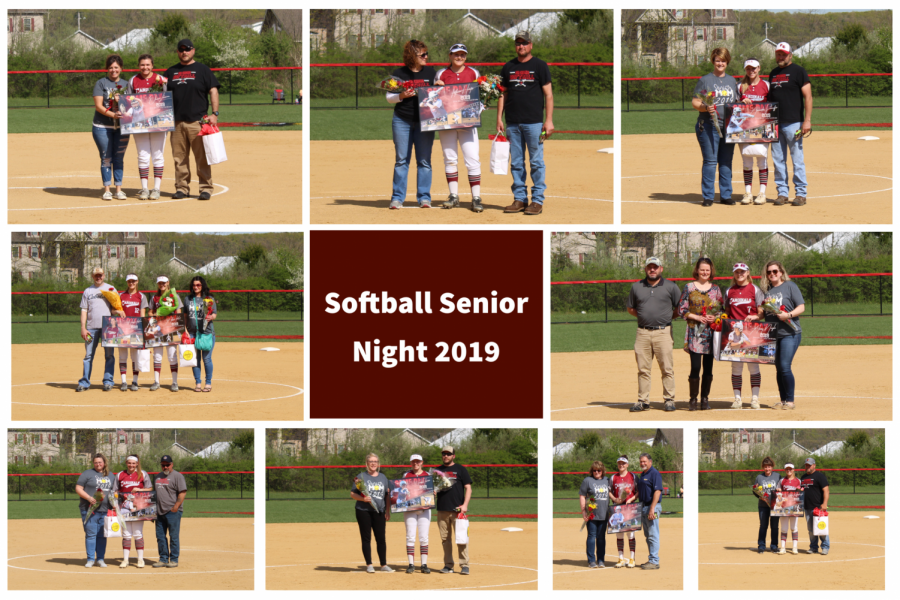 Tuesday afternoon came and the excitement of a big softball game was overwhelmed by the high emotions of senior night. Before the game all the senior girls were announced with their parents. The senior class is one of the best that Pine Grove softball has ever seen. This is what made it so hard to swallow. Everyone at the game whether it was a family member of a senior player or it was just a random spectator knew it was hard to swallow that all these girls were leaving. After the emotional ceremony, the game was underway.

The game started off and it was apparent Blue Mountain really wanted to win. They had a fire lit and they were ready to spoil a senior night. Olivia Lehman for Pine Grove taking on Peightyn Schwartz from Blue Mountain. The first inning was scoreless and slow. Senior Trisha Kopinetz said “We had a bit of a rough start, but we were able to pull it off in the end.” The following inning Pine Grove scored in the 2nd after Amanda Schaeffer scored while pinch running for Trisha Kopinetz. The inning ended and the Cards defense stayed strong and kept Blue Mountain scoreless. That’s all Pine Grove needed to finish the game. They blew open the game in the next inning scoring 4 runs in the 3rd inning. 5-0 lead in a matter of 2 innings is what the Lady Cardinals team is used to. They scored a run in the 4th after Avery Nagle sacrificed in a runner on 3rd. Avery Nagle, who got her 100 hits on Monday against North Schuylkill, said “It means that all of the time and hard work in the off season has paid off” when asked about her getting 100 hits. 6-0 heading into the 5th inning and it looked like maybe the Lady Cards were going to actually have a game that went all 7 innings. Olivia Lehman was stellar the whole game and the 5th inning was no exception. She continued her shut-out and led her team to an 8-0 lead going into the 6th inning. That’s when, after another great showing by the Cards on defense, they won the game in 6 innings 10-0.

Pine Grove, with a record of 16-0, has sealed their bid for the District and Schuylkill Leagues playoffs. This season, these girls have only had two games go the distance. They have beaten 14 of the 16 teams by either 10 run or 15 run mercy rule. The senior girls all have a hefty resume. 4 of the 9 seniors also have 100 hits. Avery Nagle, Trisha Kopinetz, Olivia Lehman and Kate Rittenbaugh all have 100 hits or more. These girls were District Champs their Freshman and Sophomore season. On top of that they were League Champs in their Sophomore and Junior season. These girls are something special and they will leave a mark on this town, on this program, and on this school for years and years to come.